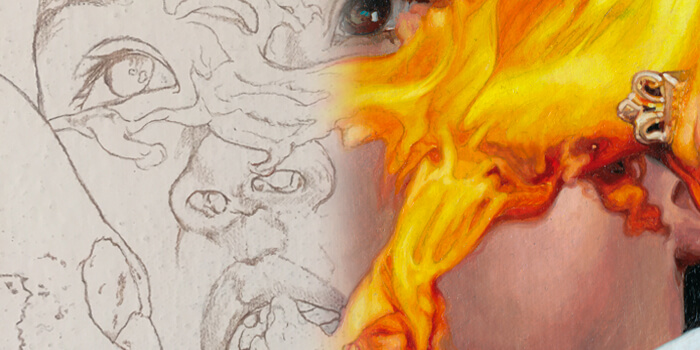 Enchained people by an already unrelatable past, legend like vanished,
where distant events and consequences from what once was lifehood, today are confused with the subdued disgrace, leaded by an assumed childish naïvety, that has been told for centuries in a despicable tone that lurks between condescendence an flickering self pitty.

Said past has been forged by fire, blood, bones and gold.
Specially in gold, as it’s what we’re all clinging to, as it holds the purest glistening shine of an idealized civilization; untarnished, immaculate, god-like creatures that after their fall, only dirty blooded one-eye culture remained.

For this, they grant themselves free rein to trample in their rest of their acquired heredity.
For this, they love and hate their now nature. Even better, they long the impossible: to be anything but themselves.
They long for other roots, for another’s eyes, for another flesh, other tongue.
Severing us all between past dragging tragedy victims and historical perpetrators.
This, by mere conjecture, by the tone of flesh.

My flesh, same as everyone else’s, differs from their eyes as it won’t fit the norm. Therefore, so easily I’m removed from all nation, from all sense of belonging.

They turn me into a forever foreigner; as I am their forever reminder of decadence.

Stateless on the eyes of those who so quickly assume who I am and whatever I got.
Even when I have none.
Even when I am a no-body.

For, who can claim to be somebody in this land with broken identity?
Or even, why to bother to build one, as it’s fair easier to mold the anonymous, shapeless, blind disarray.