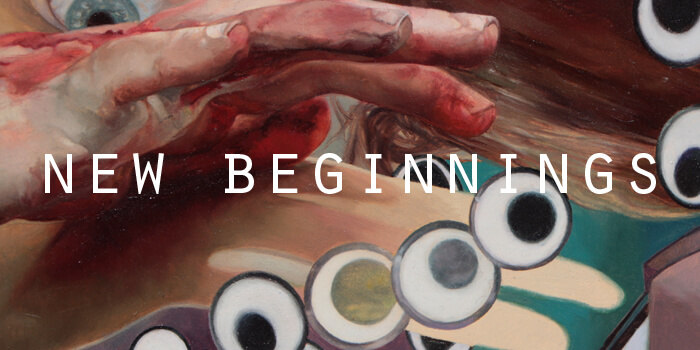 Since the beggining of my academic formation and after I got nothing from there, I very crearly traced the path I wanted to follow as the spine of my artistic development.

I knew I wanted to be a painter. I wanted to replicate and express myself through the color and bring down to the canvas the cazy silly imagery I had in my mind, I wanted to be like those dead and living artists I admire so much and I looked after in the internet over and over again. My idea had a mayor road bump when I learned nothing in art school and it seems painting was not for me because I just even knew where to start, I got dissapointed.

I then came across the marvelous etchings of Albrecht Dürer and learned that painting was not the only thing out there. I then wanted to replicate those extremely intrincate engravings I saw from him, with unmeasurable details and lines, but I wanted to incorporate that aesthetic with the morbid, and more contemporary subject matters I was drawn into: The corpse.

My path was clear then: I needed to become a master in drawing before I deared to touch paint and colors. I said to myself: ” I will spend 3 years working with ink, and then other 3 years drawing in graphite, and then I will start to paint”

Of course the silly plan didn’t went like that.

Well… sort of… but with longer time gaps.

I worked around 3 years with ink, and then I started to incorporate some washed out colors in my drawings, so washed out because I was so afraid to mess it up. Those washed out colors then got a character, I liked so much those toned down colors against the harsh contrast of the black indian ink, that it sort of became like a trademark in my work. It gave me that sense of melancholy and reality/unreality I was looking for, so I took advantage of that resource for a while. But after few years of working with ink and watercolors I had moved out to another media, to graphite drawing (which it was part of the plan) and this is the reason:

Graphite drawings brought me closer to realism and to that new feeling I was looking for.

Colors dimmed down further, monochromatic tones prevailed in the image and this sense of reality confused a little bit the audience. The tragic scenery suddenly became more real, more difficult to embrace. And I loved that.

My inner self also wanted to talk about more serious matters, social struggles, moral contradicitons, darker places. Drawing in a more realistically way also helped me to understand better the world, intelectually and visually; I learned how volume worked better (I am still learning) how ligh behaves when proyected in diferent objects and textures, etc. And I got so in love with everything about drawing that I have spended almost 5 years in this.

But I am that kind of person that in the moment I feel I’m getting too comfortable, I feel the need to change.

So I remembered that drawing was also an step part of my development. But I honestly was terrified of the color.

So I started with an awful ugly excercise in a board. I tried to do a monochromatic portrait in blue and I failed miserably, I had no idea where to start again. So in the meantime I got busy with drawings and commissions I payed a lot of attention to my husband’s paintings, and I started to learn from seeing him his method. Then I just started with a small painting with direct colors, just placing what I saw. I never finished it, but I broke the fear that restrained me.

So I fully gave myself to the color and finally started my first formal painting that aimed to be exhibited in the public, and from there I’ve been feeling more and more happy with the results I’m obtaining. Still with a little fear and with the idea always in my mind that I’m still learning. So I feel in some way this is a new beginning, as it’s been after 8 years of preparing myself that I finally have reached the point where I feel a complete artist (for now.. who knows what would I need next).