underneath 1: ‘The Child Inside’ 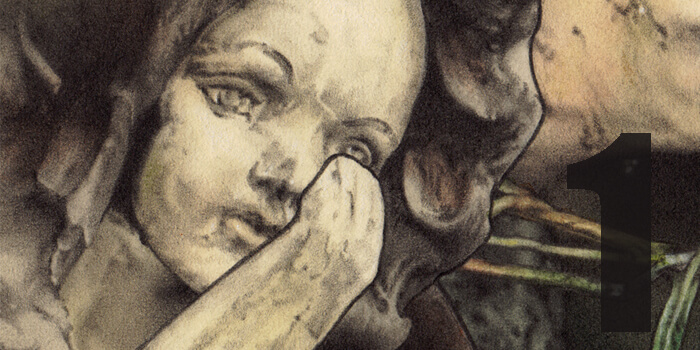 Because of my last post (read here) I though It would be a nice blog to talk, time to time, about the idea background of one of my works, for you to get into my set of mind when creating them maybe to understand them better or enjoy it in a different level.

This is something I don’t usually do as I rather leave the interpretative door completely open for you, so you can make your own stories and give the work all it’s different meanings. So I’ll try to not be as specific with the meaning of the pieces and better focus on what experiences have influenced the imagery in this particular artwork.

But first a little context:

‘The Child Inside’ was recently published in the social media showing a little detail of a child’s head surrounded in water and some half-skinned legs. As with most of my work, people sort of freaked out and got fascinated at the same time by the image. That’s an usual reaction with my most personal and strong artworks, but it’s something I don’t mind, at the contrary; I really appreciate that as it’s the result I’m looking for to achieve in each scenario:

To be both attracted and rejected by the terrible but unfathomable beauty of our human condition.

But ‘The Child Inside’ also goes a little deeper than that:

About a month and a half ago, during the last weeks of November we were out and we pass through a bunch of nice houses we tend to look when passing by but never cared too much. I wondered sometimes about the people living inside, what would they really look like, what would they do (the bunch of silly things I always think about), but that day we saw a boy with his nurse.

A boy that in 5 years I never saw outside, not once. He appeared to be taking a walk after a long time. With his bald head, an amputated but covered in bandages leg and assisted by his fake smiling nurse (it was noticeable she was uncomfortable), you could tell he was making a major effort to be outside. I can’t really tell if he was enjoying himself or in pain but his focus on walking appeared to be taking over all the other emotions in this earth, and I, in that second we passed by with the car stumbled across the look on his face, and it stuck on me all week later, feeling devastated and frustrated.

I constantly thought that all what he’s been through most be the most difficult and I couldn’t help but feel that his innocence was long lost, his gaze was no longer a child-like, he was an older man.

It came to me multiples times how unfair life must be to give ones and take from others? How terrible it is to lose innocence while being a child, how sad and usual is to see the child inside drowned in suffering and death by life’s impartial consequences. And how his life, as many others, will be forgotten.

They will be forgotten. Because no one wants to feel sad anymore, to be worried about others. Empathy is a curse right now and with all the pain and suffering in this world, Why would you like to be involved with it? Why would you want to feel sad by them? You wouldn’t put at risk your comfort zone or threaten your happy place.

I think at the contrary: by feeling his own sadness, by remembering him, by drawing based upon him I make his experience part of my own and by showing it to you I’m trying you to make you part of it too and use this whole as a proof of his (their) existence making him (them) to transcend in memory.

Later on the afternoon while planning this drawing, a sound replicated this experience though music. I’ve loved this song but It never had so much meaning for me as it has today. It was ‘The Child Inside’ from Depeche Mode and interpreted by one of my idols Martin Gore. I just froze and played it over and over and over again for days until it became part of the experience too and part of the drawing itself.

It’s symbols are also hidden in the picture but they constantly talk with the symbols that were in already. It is always funny how even small things affect and how they can transform you.

But it always amaze me how each experience (as I’ve had lots of them like this in the past) backs up and objectify the shapeless feelings and resolutions I had in the past, making stronger the determination in my artistic pursue.

6 thoughts on “underneath 1: ‘The Child Inside’”